Opioid overdoses have reached epidemic proportions in the United States in recent years. Naloxone is able to reverse an opioid overdose and may make the difference between life and death. Find out everything you need to know to save a life. 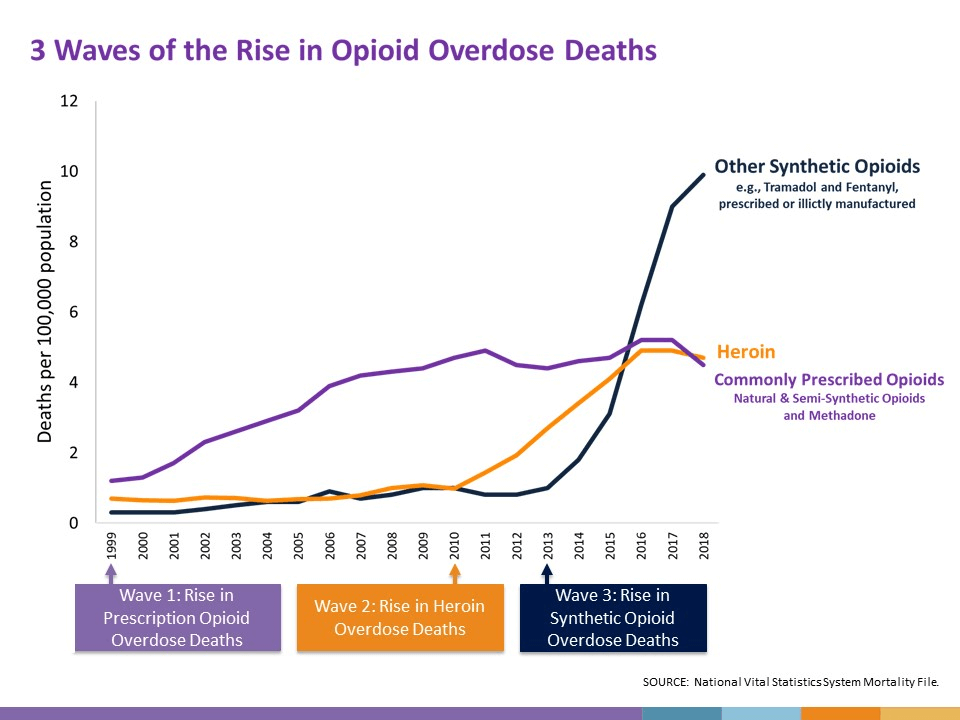 Drug overdoses have been on the rise over the past decade, and this trend has only accelerated since COVID-19 emerged. According to the CDC, the 12 months from May 2019 to May 2020 saw over 81,000 overdose deaths, which is the highest number of overdose deaths ever reported in a 12-month period. It is more important now than ever to be prepared in the event of an overdose. Being able to accurately identify an overdose, summon medical help, and render aid while medical professionals are en route may mean the difference between someone living or dying. 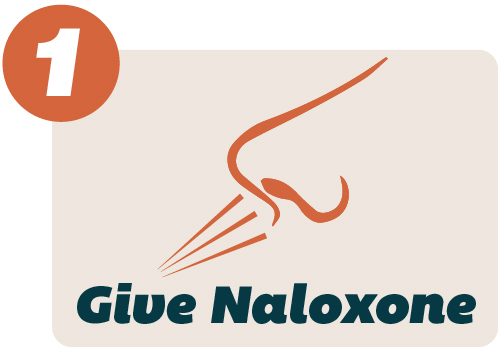 Signs of An Opioid Overdose 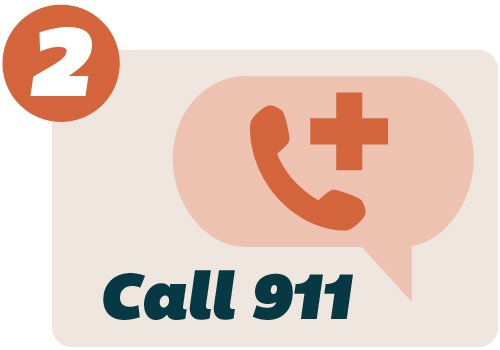 Steps For Treating An Opioid Overdose

Emergency treatment of an opioid overdose should include administering naloxone, calling 911, and performing first aid. 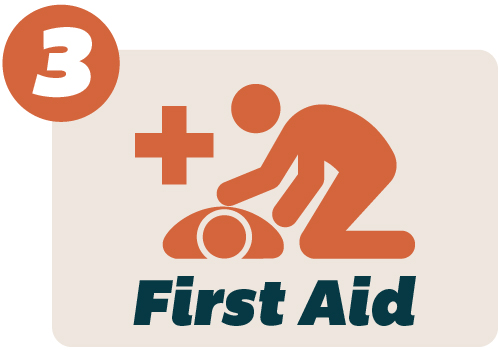 Naloxone can, quite literally, save the life of an individual who is overdosing on opioids. Find out where to get it and how to use it by reviewing training videos.

Find professional help and get started on the road to recovery. Check out our lists of accredited dual diagnosis treatment centers and inpatient rehabs listed by state for other great resources. 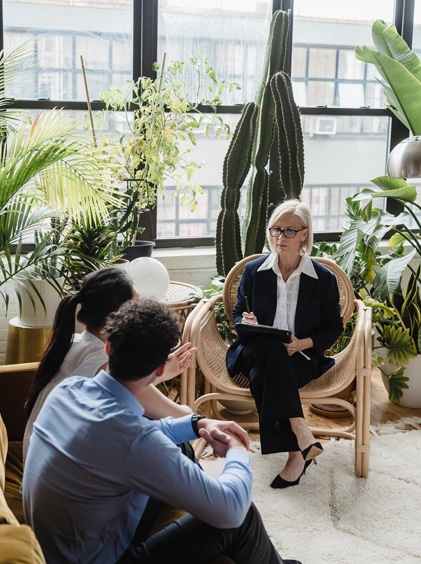 As of this writing (December 2020), the data from opioid overdose deaths in 2020 is still being collected. Ever since 1999, opioid overdoses have been increasing; sometimes steadily, sometimes drastically. There have been 3 major waves of opioid overdose increases over the last 2 decades, and these are linked to the introduction, or increase in the availability of, different opioid drugs.

Surprisingly, this can also affect people who do not even use opioids. Fentanyl is often used as a cutting agent in other drugs such as cocaine and methamphetamine. There have been many cases of people dying from a fentanyl-induced opioid overdose when they thought they were using another drug entirely.

The overdose trend may be difficult to track through the pandemic, but there are some very worrying indicators that trouble may lie ahead. One study found that even though drug testing has decreased during the COVID-19 pandemic, the percentage of fentanyl-positive tests has increased significantly. Using history as a guide, this trend will likely result in an increase in opioid overdose deaths.

The first step toward helping someone who may be overdosing on opioids is to identify the overdose. Opioid overdoses may look similar to other depressant overdoses on the surface, but there may be some key indicators to tell them apart.

Some of the identifying characteristics of an opioid overdose may include:

The most common cause of death in an opioid overdose is breathing depression. Someone may breathe too slowly, or even stop breathing entirely, which leads to permanent brain and organ damage and finally death. Luckily, opioids have an extremely effective and widely available “antidote” or reversal medication known as naloxone. This medication can literally pull opioids out of the brain, causing someone to go from an opioid-induced stupor to full consciousness within minutes. This can reverse the dangerous breathing depression that is caused by an opioid overdose and may be the decisive factor in saving someone’s life.

There are 3 very simple steps that can make the difference between someone surviving an opioid overdose or not: 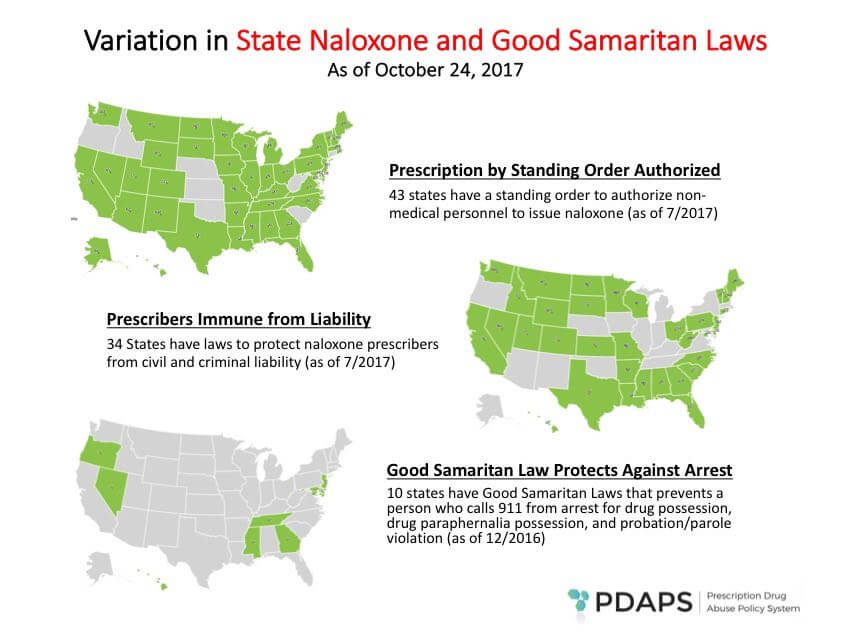 Many people may have heard of naloxone by now, but knowing where and how to get naloxone is another story. Also known by brand names like Narcan or Evzio, naloxone has become more widely available in recent years due to its effectiveness at reversing opioid overdoses. Depending on the state, someone may be able to pick up naloxone without a prescription, while other states allow a pharmacist to write a prescription on the spot.

As far as national naloxone access, here is an interactive map that provides laws in each state regarding naloxone access and use. This map, as well as the one below, are accurate as of 2017, so make sure to talk to a doctor or pharmacist in your area to get more current information.

Once you are aware of the laws in your state, you may be able to get naloxone. There are a lot of different places to get naloxone, including common pharmacies as well as delivery services. There are also different types of naloxone, such as generic or brand name. A generic naloxone prescription will usually cost much less to get filled than a brand name such as Narcan or Evzio.

Naloxone prescriptions usually come with a clear set of instructions that will walk someone through how to use them during an overdose. It is also possible to talk to the pharmacist that fills the prescription to get a quick rundown of how to use naloxone. That being said, it may be wise to be as prepared as possible and get as much information or training as you can before the need arises.

These training resources combined with the information provided by pharmacists and the prescriptions themselves will help someone become educated about how to use this potentially life-saving medication. Being willing, able, and prepared to use naloxone may help save someone’s life.

Suicide by overdose is more common than one might think. One study of 11 U.S. states between January 2011 and December 2012 and national data from 2012 and 2016 found that there were just over 420,000 drug-involved suicide attempts that resulted in just over 21,000 deaths. While opioids were present in only 15-17% of drug-involved suicide attempts, they were over 5x more likely to result in death.

The higher likelihood to die from an intentional opioid overdose is concerning, due to the widespread availability of legitimate prescription opioids and illicit opioids. If someone is struggling with mental health issues such as depression, then they may have an increased risk of a successful suicide attempt if opioids are involved.

The Link Between Mental Illness and Opioid Abuse

“Although the relationship between mental health and pain management is complex, we find that as a population, adults with mental health disorders receive more than half of all opioid prescriptions distributed each year in the United States.”

Again, the exact relationship is unclear but there is some significant overlap between drug or alcohol addiction and mental health issues. What is clear, is that unless someone receives treatment for both conditions at the same time, their chances of achieving long-term sobriety are much lower.

While naloxone can prevent a fatal overdose, it cannot address the root cause, which is opioid addiction. Recovering from opioid addiction requires going through opioid withdrawal, and while this is rarely fatal, it can be very uncomfortable. Entering a medical detox center can reduce the discomfort and improve the chances of successfully completing the withdrawal and detox process. Once detox is completed, it is often recommended that someone seek further treatment at an inpatient or outpatient addiction treatment program.

The presence of mental illness can increase the risk of relapse and negative outcomes. Finding a dual diagnosis treatment center is crucial if someone wants to receive the most comprehensive care possible. These types of treatment centers specialize in treating co-occurring mental health and substance use disorders and have the experience and expertise to provide someone with the best possible chance of achieving long-term recovery.